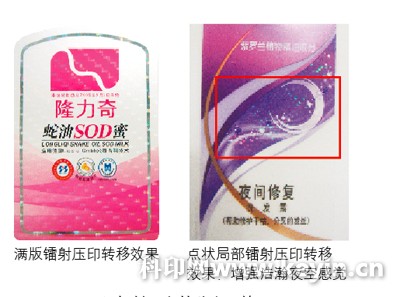 The advantages of the laser imprint transfer process are: 1 Compared with the traditional hot stamping foil, the laser embossed film is very environmentally friendly, and can be made by pressing the heated laser nickel plate on the PP film, and the traditional hot stamping The printing foil needs to be coated on the PET film with a plurality of chemical components such as a release layer, an embossed layer, an aluminized layer and a glue layer; 2 the cost of the laser embossed film is lower than that of the conventional hot stamping foil, and there are many types. And can be used more than 3 times; 3 can be used for local laser imprinting transfer; 4 simple process, low scrap rate.